Alessandro Taverna at the Filarmonica Romana

November 1, 2017 by admin in Blog
Alessandro Taverna at the Filarmonica Romana for their Beethovenklavier series
I have only been able to attend two of these memorable concerts that Matteo D’Amico ,the Artistic Director of the Filarmonica Romana,has dedicated to the Pinnacle of the piano repertoire:The 32 Sonatas of Beethoven. 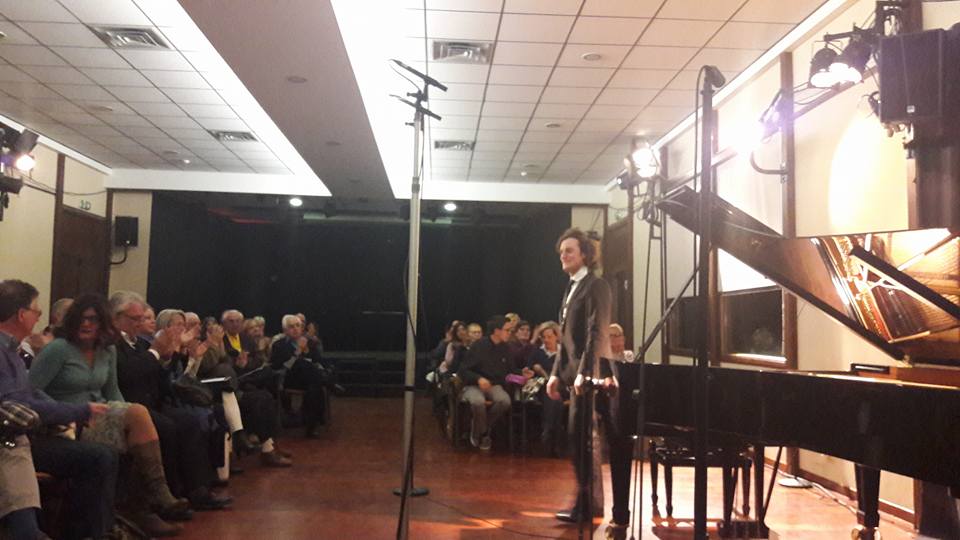 Giving the stage to some of the most remarkable pianists of their generation and all Italian too.
Not content with this, as a notable composer in his own right ,he has included a piano work by contemporary Italian composers in each programme.
All these concerts recorded for the RAI for future broadcast including a brief but sometimes illuminating talk by the composers themselves.
The recitals  are under the eagle eye of Andrea Lucchesini ,the director of the famous Academy in Fiesole,and a very distinguished pianist in his own right. 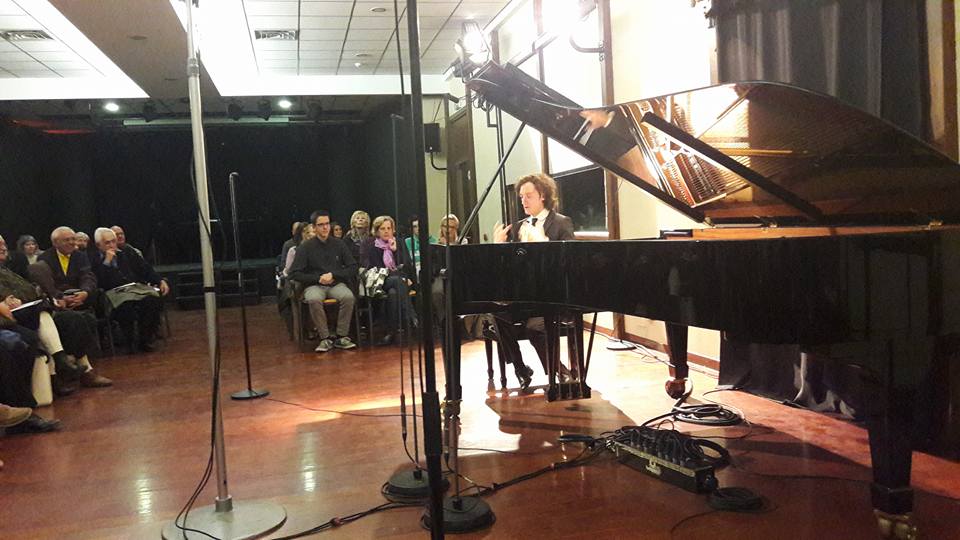 I well remember Cherkassky when I took him to play in Empoli, Busoni’s birthplace,being invited to Luciano Berio’s house nearby to hear his protege Andrea Lucchesini play.
Cherkassky was very impressed and that young boy has since gone on to have a very distinguished career never forgetting in turn to help his younger colleagues.
Much in the same vein as his teacher Maria Tipo.
There is certainly something in the hills around Florence that is conducive to great pianists.
All the concerts in the Sala Casella ,part of the beautiful Villa which is the seat of the Filarmonica .
Is it just a coincidence that the Casella edition of the Beethoven Sonatas was for many years the bible for young pianists ?
The bust of his hands was recently bequeathed to the Filarmonica by that great,much missed Italian pianist Lya De Barberiis also champion of so many Italian contemporary composers.
Her memorable lecture recital in this very hall for her 90th birthday a few years ago has become a benchmark for all those interested in the Italian composers of that period.
My previous visit was to hear that great stylist Leonora Armellini and today it was the turn of Alessandro Taverna fast being recognised as one of the finest interpreters of his day especially of contemporary music.
Interesting to note that both have been chosen to perform for the Keyboard Charitable Trust of London founded by a disciple of Benedetti Michelangeli, Noretta Conci-Leech.
Hats of to the composer Matteo D’Amico because for me the highlight of the recital today was the contemporary piece by the composer Michele dall’Ongaro.
President in his own right of the Accademia di S.Cecilia and director of RAI 5 the cultural station like BBC 4 in the UK . 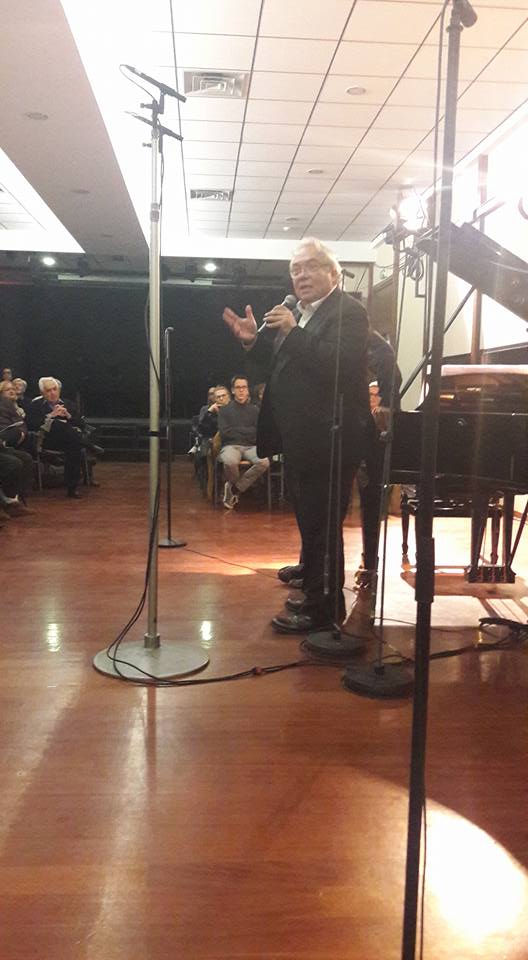 His only piece for solo piano written in 1989 as he very amusingly decribed the five “brief” scenes that make up his “Autodafe’”.
Explaining that everything of any importance has already been done by Beethoven and so anything that composers  could offer today had in some way already been contemplated by Beethoven.
But he said the greatest joy for a composer was to be alone in a darkened room with a pencil and manuscript paper to turn his fantasy into sound.
He certainly did that in these varied pieces describing the jouney to the scaffold!
Amazing sounds from the piano played with such conviction by Alessandro Taverna.
He did not break a string in the final piece as the composer had recommended but as a true master of the piano played with the same vehemence that was required.
In fact it was even more remarkable for the contrast that he found .
The floating sounds of the fourth piece “rassegnato” and the contrasts in the first piece “riluttante” all played with an enviable clarity and precision but with a fantasy that made  the composers own images so immediately apparent.
The three Sonatas op 27 n.1 “quasi una fantasia”; op 53 “Waldstein”; op 110.
All three sonatas played with the rigour for which this young man is renowned and duly feted by Lorin Maazel ,who on hearing him at his festival in Castleton,USA for the KCT, immediatley engaged him to play together with his Munchner Philharmoniker.
A Beethoven in which the great contrasts that are so much part of Beethoven’s character were immediately apparent.
The virtuoso demands in the Waldstein were played with a mastery that did not deny either the struggle that is within and is the very essence of this sonata.
The short slow movement (Andante Favori that was the original mouvement was published separately ) was a beautiful introduction to Rondo’-Allegretto moderato where the bell like melody entered so gently on a cloud of sound before the very energetic eruptions. The first movement played at just the right tempo that allowed the second subject to make such a telling contrast, without a change of tempo ,with the rhythmic rumble with which the movement begins. 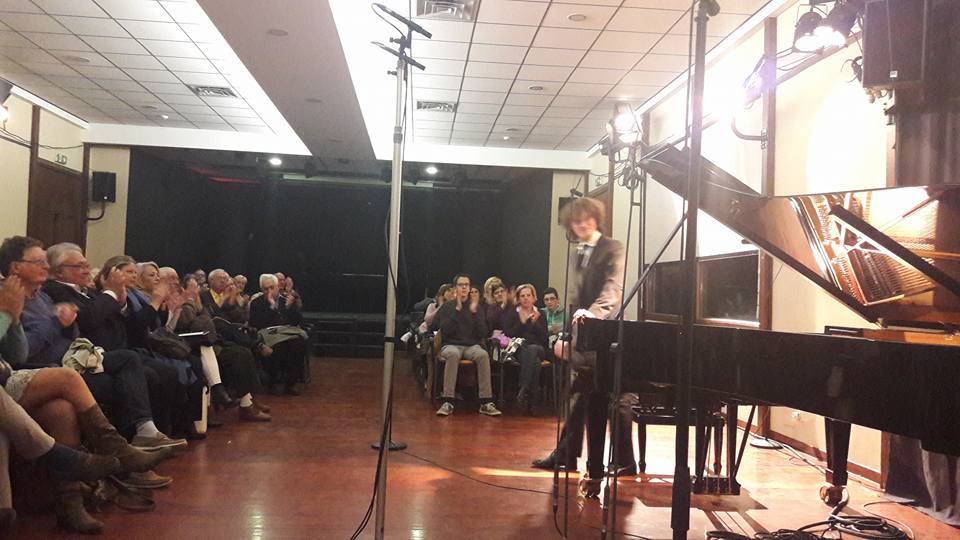 Infact it was this sense of line that was so apparent in the penultimate Sonata op 110.
This seemingly Pastoral Sonata that is sometimes so difficult to perceive as a whole was here given an exemplary reading.
Eventually some of the magical sounds that had sparked his fantasy in the contemporary piece he will add to his notable intellectual musicianship that gave such a sense of architectural line to this masterpiece where Beethovens rage was turning into something so much simpler and profound as in the works that follow op.111,126 and the great Diabelli op120.
The companion sonata to the more famous “Moonlight” was played with all the simplicity and rhythmic energy that brought this once much neglected sonata to life.
Hats off to the Filarmonica and Matteo D’Amico for promoting Beethoven, the finest young Italian musicians as well as contemporary Italian composers .
Matteo D’Amico who wrote the score many years ago for me to play in Orazio Costa’s famous edition of Pirandello “Cosi e’ se vi pare” with my wife the renowned actress and impresario Ileana Ghione.
Share:

There is one comment on Alessandro Taverna at the Filarmonica Romana

This website uses cookies to improve your experience while you navigate through the website. Out of these, the cookies that are categorized as necessary are stored on your browser as they are essential for the working of basic functionalities of the website. We also use third-party cookies that help us analyze and understand how you use this website. These cookies will be stored in your browser only with your consent. You also have the option to opt-out of these cookies. But opting out of some of these cookies may affect your browsing experience.
Necessary Always Enabled

Performance cookies are used to understand and analyze the key performance indexes of the website which helps in delivering a better user experience for the visitors.

Analytical cookies are used to understand how visitors interact with the website. These cookies help provide information on metrics the number of visitors, bounce rate, traffic source, etc.

Advertisement cookies are used to provide visitors with relevant ads and marketing campaigns. These cookies track visitors across websites and collect information to provide customized ads.

Other uncategorized cookies are those that are being analyzed and have not been classified into a category as yet.