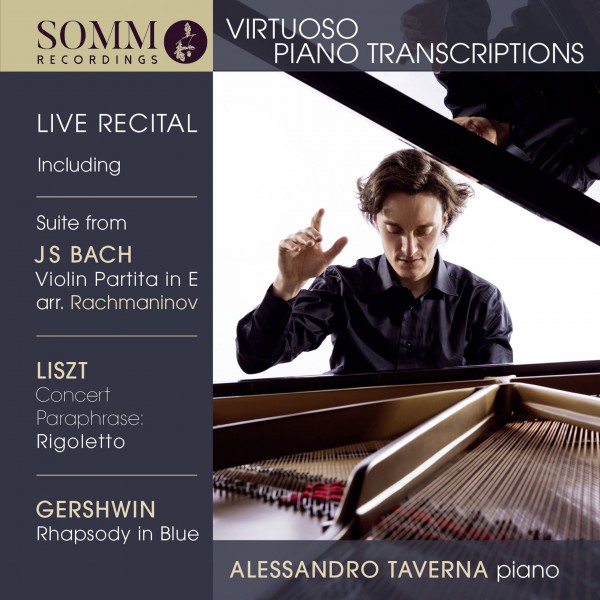 During its peak popularity in the century from 1820, the art of transcription provided access in both the home and the concert hall to the riches of the symphonic and operatic repertoires through the conduit of the piano.

Recorded as part of the 2018/2019 Piano Series at Turner Sims, Southampton, Alessandro Taverna celebrates a lost art that made great music available to the widest audience in an era before the first recordings and radio.

Treated to a masterly re-imagining by Rachmaninov, Bach’s Third Violin Partita opens a recital that also showcases Taverna elegant virtuosity at the keyboard.

Liszt’s transcriptions of three Schubert songs reveal his sensitivity to the originals and his appreciation of the piano’s ability to conjure fantasy to mesmeric effect, his ‘paraphrase’ of Verdi’s Rigoletto a miniature marvel for the piano.

Echoes of Liszt can be heard in Ernst von Dohnányi’s delightfully dancing re-working of Johann Strauss the Younger’s Schatz Walzer and in George Gershwin’s electric, effervescent arrangement of his own Rhapsody in Blue, a thrilling display of pianistic fireworks brilliantly realised by Taverna.

Alessandro Taverna’s previous recordings for SOMM include Sonatas by Nicolai Medtner (SOMMCD 0142) and music by Debussy and Ravel (SOMMCD 0168), of which Fanfare magazine said: “Boldness and refinement keeps the playing interesting at every moment… Taverna distinguishes every textural strand with clarity… this superb release will add lustre to his reputation”.