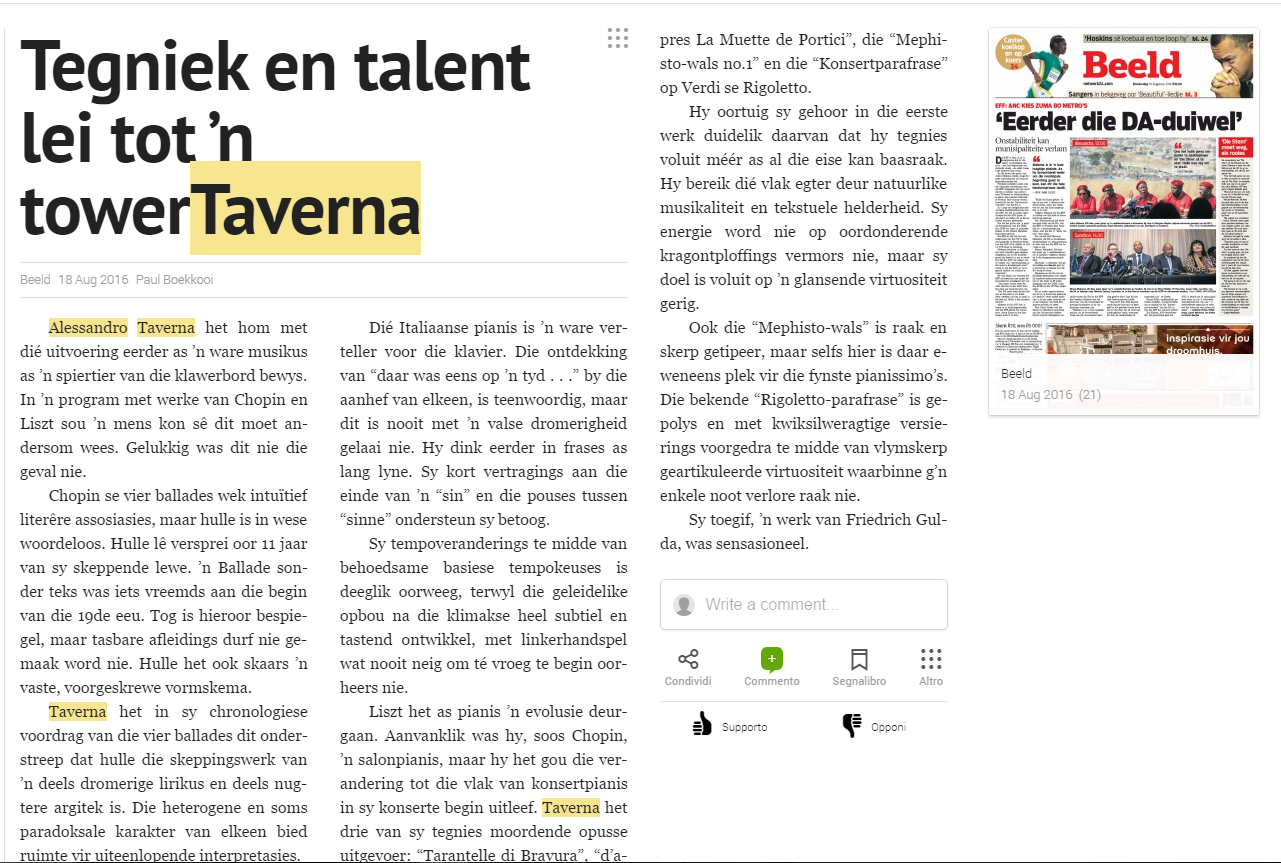 (English translation) Alessandro Taverna has proved himself with this performance as a real musician rather than as a muscular of the keyboard. In a program with works by Chopin and Liszt, one would be able to say it should be the other way round. Fortunately this was not the case.

Chopin’s 4 Ballades evoke intuitiv literary associations with literature, but they are basically wordless. They are spread over 11 years of Chopin’s creative life. A Ballad without text was something strange in the beginning of the 19th century. However, speculation about this, but tangible conclusions dare not be made. They also hardly have a solid form or a prescribed scheme.

Taverna in its chronological presentation of the four ballades underlined that their creation is made partly by a dreamy lirikus and partly by a sober architect. The heterogeneous and sometimes paradoxical character of each one offer possibilities for different interpretations.

The Italian pianist is a true storyteller for the piano. The discovery of “There was once upon a time …” in the title of each one is present, but it was never charged with a false dreaminess. He rather think to phrases as long lines. His slight delays at the end of a “phrase” and the pauses between “sentences” support his argument.

His tempo changes in between are well established – basic tempo choices are carefully considered, and the escalation towards the climax developed itself very subtle and energetic, with the left hand game that never tends to dominate the lyric melody too soon.

Liszt as pianist went throught an evolutionary artistic development. Like Chopin he started as a salon pianist, but he soon began to realize the change to the level of a concert pianist in his concerts. Taverna executed three of its technically grueling works: “Tarantelle di Bravura”, d’apres la Muette the Portici”, the “Mephisto waltz no. 1 “and the” Concert Paraphrase ” on Verdi’s Rigoletto.

He clearly convinced his audience in the first works that he is technically fully more capable than all requested. However, he reached a deep level of natural musicality and of textual clarity. His energy is not wasted on overpower force of thunder, hammering explosions, but his effort is fully focused on a gleaming virtuosity.