The last concert of the Swan Hotel Sunday Series 2017 featured the Venetian pianist Alessandro Taverna, third prize winner in the 2009 Leeds Piano Competition, in an all-Chopin recital.
Mr Taverna featured the Four Ballades in the first half of this varied programme. His playing delivered a fine contrast between the poetic and the flamboyant, at times leading to some lack of clarity and rhythmic definition not helped by the acoustics, especially towards the rear of the venue.
However the overall performance of this demanding group was satisfying and demonstrated the complex fusion of poetry and romance inherent in the music. 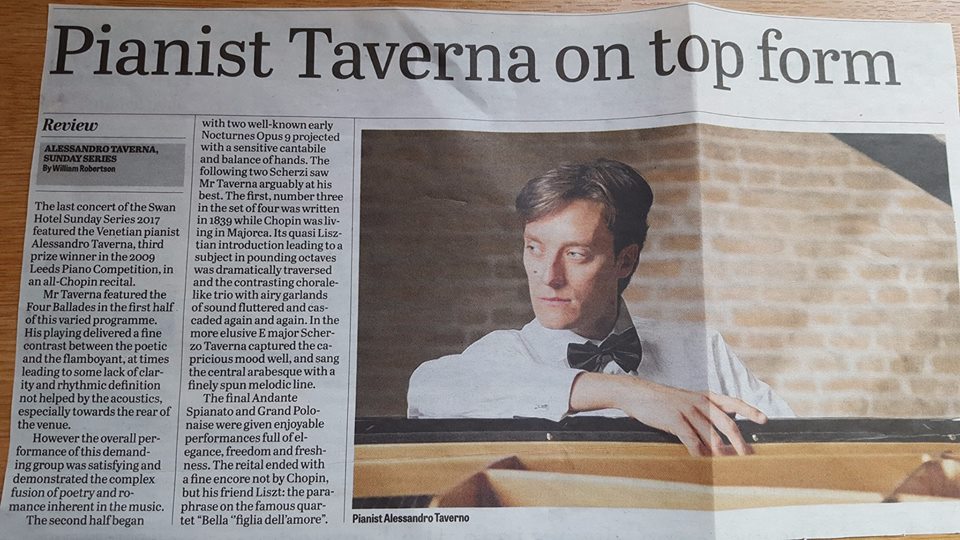 The second half began with two well-known early Nocturnes Opus 9 projected with a sensitive cantabile and balance of hands. The following two Scherzi saw Mr Taverna arguably at his best. The first, number three in the set of four was written in 1839 while Chopin was living in Majorca. Its quasi Lisztian introduction leading to a subject in pounding octaves was dramatically traversed and the contrasting chorale-like trio with airy garlands of sound fluttered and cascaded again and again. In the more elusive E major Scherzo Taverna captured the capricious mood well, and sang the central arabesque with a finely spun melodic line.
The final Andanta Spianato and Grand Polonaise were given enjoyable performances full of elegance, freedom and freshness. The recital ended with a fine encore not by Chopin, but his friend Liszt: the paraphrase on the famous quartet “Bella figlia dell’amore”

We use cookies to ensure that we give you the best experience on our website. If you continue to use this site we will assume that you are happy with it.I accept